President Obama made headlines in his 2015 State of the Union Address by proposing middle-class tax cuts to be funded by raising taxes on the wealthiest taxpayers and largest financial institutions.  He also announced a plan to make community college tuition free for two years for millions of students.  Will either program happen?  Most say not, pointing to those in Congress who believe that raising taxes would hamper economic growth for everyone. 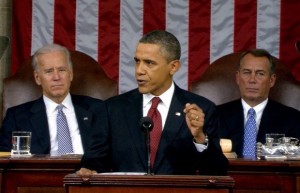 If Mr. Obama’s State of the Union proposals do not come to pass, he’ll be in good company.  In 2005, George W. Bush proposed a commission to study the impact of baby boomer retirements on social programs.  In 2000, Bill Clinton asked for “smart guns” with technology that would keep weapons out of the hands of children.  In 1986, President Reagan announced a new “Orient Express” that would fly from Dulles Airport to Tokyo in two hours.  None of these programs came to pass.

The American president may be the leader of the free world, but even he does not have the authority to legislate reality.  Who does?

The state of the union in ancient Israel was strong.  In fact, you could argue that the nation had never been more prosperous under David’s rule.  Then came “the time when kings go out to battle” (2 Samuel 11:1), in this case in a war against Ammonite armies to the east.  But this king stayed home.  Because David was not where he should have been, he did what he should not have done—his affair with Bathsheba stains his legacy still today.

Despite the king’s personal and public failures, God was gracious to help Israel defeat their enemy.  When David took the Ammonite king’s crown and placed it on his own head (2 Samuel 12:30), he knew his victory was not due to his personal integrity or military prowess.  Rather, he testified: “Some trust in chariots and some in horses, but we trust in the name of the Lord our God” (Psalm 20:7).

Reading his statement, the thought occurred to me: service requires faith.  We all want to be great at something, to be recognized by someone, to be noted and acclaimed.  Our culture teaches us to promote our own agenda, to work for our own advancement.  But God wants us to trust our future and reward to him, believing that his will is “good, pleasing and perfect” (Romans 12:2), that he has a plan to prosper us and not harm us, to give us hope and a future (Jeremiah 29:11).

I will serve God and others only if I trust my present significance and future reward to my Lord.  Abraham lied about being Sarah’s husband because he did not trust God to protect him if he spoke the truth (Genesis 20:1-13).  James and John wanted Jesus to promise them positions of authority in his future kingdom because they did not trust God to do whatever was best (Matthew 20:20-28).

The next time you have an opportunity to impress someone with yourself or with your Lord, you will discover whether you trust chariots and horses or the grace of God.