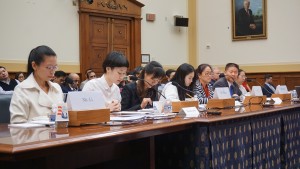 (WNS)–Six women who testified before Congress on May 18 belonged to an exclusive, tragic club: The wives of human rights lawyers and activists imprisoned by the Chinese government.

The women, two of whom addressed lawmakers in a pre-recorded video, shared similarly distressing stories of their husbands’ arrests for human rights work, the torture they faced in prison, and the emotional and physical toll on their families. Together, the wives urged the Trump administration to raise their husbands’ cases to Chinese President Xi Jinping and end the torture of political prisoners.

At the hearing, one woman said she did not know whether her husband was dead or alive, while another, the wife of Christian lawyer Li Heping, recently reunited with her husband, who looked about 20 years older after enduring two years of torture. A Tianjin court sentenced Li to three years in prison with a four-year reprieve, claiming he “attacked and discredited organs of the state and China’s legal system” by speaking to foreign reporters, used foreign funds, and “colluded with illegal religious activities to subvert the power of the state.”

Friends said officials spent 10 days trying to help Li gain weight before allowing him to return home. Still, he was 30 pounds thinner, his hair gray, and his frame emaciated. Li’s wife, Wang Qiaoling (Chinese women keep their maiden names after marriage), said in a video message at the hearing that officials drugged her husband while in prison, forcing him to take “hypertension medicine” even when Li never suffered from hypertension. When he refused to take the drug, guards pinned down his arms and legs and forced him to swallow. Afterward, Li experienced muscle pains, lethargy, and blurred vision. The forced medication continued for 22 months.

Guards also blasted air conditioning at him for days, forced him to hold a specific position for 10 hours at a time, and placed him in shackles with a short iron chain connecting the handcuffs with ankle cuffs so he couldn’t stand upright, Wang said. After a month in those shackles, Li could no longer stand up straight.

Hearing stories of the torture Li Heping went through made Jin Bianling fearful of what her husband, human rights lawyer Jiang Tianyong, could be facing. Authorities detained Jiang while traveling to meet the family of fellow lawyer Xie Yang in November. Jin does not know where her husband is, but recently the government released a short clip of Jiang walking as proof he had not been tortured. His wife noticed his face was swollen, his right arm didn’t move when he walked, and both legs were covered with purple bruises. “They said he didn’t face torture, but I don’t believe it,” Jin said at the hearing. “I’m worried for his life.”

Xie’s wife, Chen Guiqiu, also testified her husband endured “beating delivered in rotation by a roster of guards, exhausting interrogations for 20 hours at once, having cigarette smoke blown into his face and eyes, starvation, dehydration, and the refusal of medical treatment for his illnesses.” After publishing Xie’s torture account in January, national security agents threatened Chen and carefully monitored her every movement.

Chen and her daughters successfully escaped to the United States through Thailand in March, but she said she still felt unsafe. Police told Xie and her family members that unless she returned to China, Xie would not be free. At the hearing, she begged the United States to protect her and her children.

Wang Yanfang, the wife of human rights lawyer Tang Jingling, mentioned the personal toll she faced because of her husband’s work promoting democracy. Authorities harassed her, forced her employer to fire her, monitored her, and detained her, all of which severely damaged her physical and mental health.

Li Wenzu is the only wife without any clue about her husband’s situation because officials will not allow lawyers or family to visit Wang Quanzhang and never paraded him on television or held a sham trial. She does not know if he is died or alive; all she knows is that another imprisoned human rights lawyer said he once heard Wang screaming for help. “It filled me with dread,” Li said on the pre-recorded video. “I can’t eat or sleep.”

The last wife, Lee Ching-yu, differs from the other women in that she is a Taiwanese citizen whose husband, Lee Ming-che, was detained while traveling to mainland China where he supports the families of political prisoners. In a softer, Taiwan-accented Mandarin, Lee said she struggled to find information about her husband as cross-strait relations deteriorated after the election of Taiwanese President Tsai Ing-wen.

A Chinese representative of the Taiwan Affairs Office showed Lee a letter from her husband, which she believed he wrote under duress. The representative claimed her husband violated the country’s new foreign nongovernmental organizations (NGO) law and threatened her to keep quiet and stay in Taiwan or else they would release a video of her husband “admitting to having committed criminal actions.” She refused and bought a ticket to China to visit her husband, but the Chinese government barred her from entering the country.

Lee warned the United States to pay attention to her husband’s case because a similar fate could befall foreign NGO workers in the near future. His detention will also hurt China’s goal of convincing Taiwan to reunite with China, Lee said. “If China maintains that my husband’s actions of spreading the values of democracy and aiding the family members of political prisoners compose a threat to its national security, I believe the people of Taiwan will become not only more certain of their unwillingness to be annexed but also hesitant to preserve a close relationship with China.”

Rep. Chris Smith, R-N.J., co-chairman of the Congressional-Executive Commission on China, said the panel would request President Donald Trump and Vice President Mike Pence meet with the wives. He also promised to send the president the names of guards who tortured political prisoners to ensure they were barred from entering the United States.

Smith also recognized the potential risks the wives took by speaking at the hearing.

“We will monitor to ensure that because they have spoken out boldly and in an open forum like today that any further retaliation against their husbands or members of their family will be watched closely,” Smith said. “I hope the Trump administration will be bold and effective in raising individual cases.”