Approved for use by the FDA in 2002, Essure has generated thousands of complaints from women who say the implanted device led to chronic pain, perforation of fallopian tubes, bleeding, and possible device-related deaths. Some say it also failed to prevent pregnancies as advertised. 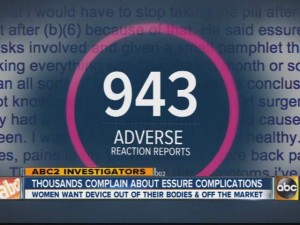 The public meeting, held Thursday at FDA headquarters, included a panel of obstetrics and gynecology experts, FDA staff, representatives from Bayer HealthCare, the device manufacturer, as well as Essure patients and family members who shared about their problems with the device.

Essure, which has been implanted in about 750,000 women since its approval, consists of two small nickel-based coils inserted into the fallopian tubes. The coils are supposed to cause the body to form scar tissue in the tubes, permanently blocking sperm from reaching released eggs. Proponents argue the device is the only nonsurgical form of permanent sterilization, does not require general anesthesia, and allows women done with childbearing to stop taking hormone-based contraception.

But critics argue the FDA fast-tracked the approval process to get the device on the market and say incomplete studies have not provided enough information on possible allergies and risks.

“How can we not have data on nickel allergy when you have a device that is 55 percent nickel and 20 percent of women are known to be nickel allergic?” asked Dr. Peter Shalock of Harvard Medical School, one of the experts on the panel. “Why is there no data on that in your package?”

An op-ed published in the New England Journal of Medicine last week called into question the two scientific studies completed before FDA approval, purporting to show the device was safe. “Though Essure offers possible advantages to women seeking sterilization, the evidence suggests that it is neither as effective nor as safe as the premarketing-approval evaluation indicated,” according to the authors, three doctors from the Yale School of Medicine.

They argue the studies only included women with successful implants, and tracked only 85 percent of patients for a year, and only 25 percent for two years. The authors call for a new study looking at specific risks and tracking patients for five years.

“When the FDA approved Essure, they moved too quickly on a relatively incomplete set of data,” Sanket Dhruva, one of the op-ed authors, told CNN.

Dissatisfied Essure patients at last week’s meeting called for an FDA recall. Women complained of autoimmune problems such as eczema, lupus, and celiac disease, as well as cysts, tumors, severe fatigue, memory loss, and hallucinations, according to reporting by The New York Times. In many cases, women resorted to surgical procedures to remove the devices. As of this summer, more than 5,000 women had submitted reports about Essure to an FDA database that compiles “adverse-event reports.”

But some testimony supported Essure’s continued use. Dr. Raegan McDonald-Mosely, the chief medical officer for Planned Parenthood, said her organization conducted an internal review and found few problems with Essure, according to The Times.

“We continue to offer Essure as an important option,” she told the panel.