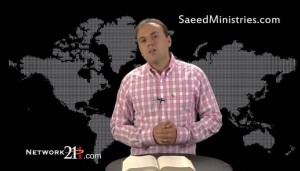 NASHVILLE (BP) — As pastor Saeed Abedini nears the second anniversary of imprisonment in Iran, his wife Naghmeh is organizing a Sept. 26 worldwide prayer vigil for Abedini and other Christians persecuted for their faith.

This image was captured from a May, 2012 Youtube video Saeed Abedini made before his 2013 imprisonment for his faith. He shares his conversion experience and encourages persecuted Christians to persevere.

“I’m doing a prayer vigil on this day to remember Pastor Saeed and others who are imprisoned for Christ, but also as a chance to come together as the Body of Christ and see the move of God as we pray together,” she said in a video posted on the Be Heard Project’s website, an initiative of the American Center for Law and Justice. “Please join me on this special day as we come together and pray.”

As of today (Sept. 18), groups had signed up to host individual prayer meetings at more than 418 locations in the United States, including Southern Baptist churches, the White House, the steps of state capitols, and Christian churches of various denominations.

Abedini faces death threats in prison, avoiding exercise sessions when radical Islamists would most likely try to kill him, the U.S. Center for Law and Justice reported in August. His wife and their two children remain in Idaho.

Lead pastor Behnam Irani and assistant pastor Silas Rabbani, both of the Church of Iran in Karaj, have been charged with “spreading corruption on Earth.” Abdolreza Ali-Haghnejad, another leader in the Church of Iran movement in Karaj, was originally charged with “warring against God,” but a court has changed the charge to “spreading corruption on Earth,” according to Morning Star News.

The charges are “a clear escalation in Iran’s campaign against Persian Christians” and “an attempt to gain an apostasy conviction by other means,” Mervyn Thomas, chief executive of the religious freedom organization Christian Solidarity Worldwide, said in a press statement.

So far this year, Iran has executed 12 people under the “warring against God” statute and two for “spreading corruption on Earth,” Morning Star News reported.

When Iranian officials arrested Ali-Haghnejad, they raided his home in Bandar-Anzali and captured two other Christians there, Mohammad Roghangir and Suroush Saraie, both converts from Islam. Both are thought to be held in Shiraz Prison. They have been found guilty of “action against the national security” and “propaganda against the order of the system.” Roghangir was sentenced to six years in prison; Saraie, to two and a half years. Appeals of their sentences failed.

Registration information for the prayer vigil is available by email at globalvigil2014@gmail.com and on the website http://beheardproject.com/prayer-vigil/saeed.