During my tenure in the Rhode Island State Senate a national discussion arose on partial birth abortion. It was a procedure that I knew little about, but I did my homework. I was stunned to learn that any human being would condone it much less participate in this shockingly brutal taking of human life. 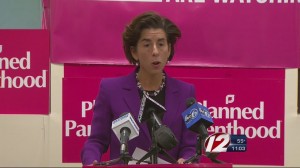 This is why I am so shocked that Gina Raimondo, my party’s candidate for governor would want to take a position in support of this depravity.

There are few issues that divide people as much as abortion. Some see it as an issue of women’s rights and others as a matter of life and death, literally. As a proud Democrat, long time legislator and nurse, I have always fought for the rights of women.

The Rhode Island General Assembly and Congress both held many hearings on this matter and heard from many different witnesses. One who left an indelible impression on me was Brenda Pratt Shafer, a registered nurse who worked at an abortion clinic in Ohio.

She testified that the doctor, “delivered the baby’s body and arms – everything but the head. The doctor kept the baby’s head just inside the uterus. The baby’s little fingers were clasping and unclasping, his feet were kicking. Then the doctor stuck the scissors through the back of his head, and the baby’s arms jerked out in a flinch, a startled reaction, like a baby does when he thinks he might fall. The doctor opened up the scissors, stuck a high-powered suction tube into the opening and sucked the baby’s brains out. Now the baby was completely limp.”

There is no medically necessary reason to end the life of a child in this way as was testified to by the American Medical Association and other prominent members of the scientific community. Those who favor this practice do so on the basis of ideology and do so at the expense of a good and decent society.

I was proud, along with most of my Democratic colleagues, to pass a ban on this barbarism. Prominent liberals and Democrats, such as the late Senator Daniel Patrick Moynihan of NY and Patrick Kennedy of RI, likened the practice to infanticide. Governor Almond, our then pro-choice Republican Governor, did the same in his transmittal message to the legislature.

Much has happened since that date in 1997 when Rhode Island went on record as opposing this practice. Gina Raimondo has promised to repeal our statutory ban on partial birth abortion. Our statute is patterned after the federal ban upheld by the U. S. Supreme Court in 2007. The Raimondo campaign is now trying to obfuscate her extreme position, referring to the matter as “goofy.” This is a shameless attempt to mislead voters about her calculated position on partial birth abortion.

While jobs and the economy are obviously paramount, each and every voter needs to face the harsh reality of what Gina Raimondo is advocating, and what this tells us of her scale of values. She is too extreme for Rhode Island and Democrats who have served our party and the people of Rhode Island.