‘You will see riots’: U.S. told to brace for ‘messy’ campus unrest 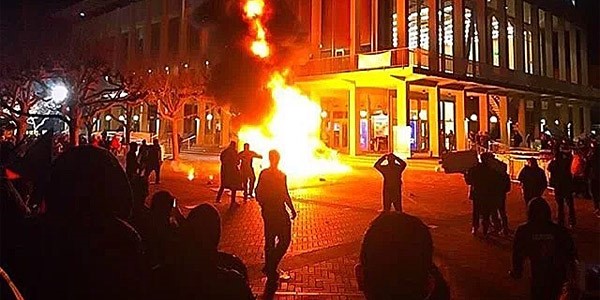 As colleges and universities prepare for the return of students in the coming weeks, one of the few administrators willing to criticize the tidal wave of intellectual intolerance on campus is expecting “a mess” when the new semester dawns.

Oklahoma Wesleyan University President Dr. Everett Piper gained tremendous notoriety in 2015 when he wrote an opinion column decrying universities for coddling student demands for safe spaces and the eradication of ideas that don’t mesh with the orthodoxy of political correctness. In that column, he famously declared that a college is not a daycare.

He is now author of “Not A Day Care: The Devastating Consequences of Abandoning Truth.” Piper said America needs to brace for more campus unrest.

He fears many Americans still don’t see how dangerous this campus intolerance and groupthink really is. “What we see on the college green from Berkeley to Brown is going to consume our whole culture. What’s taught today in the classroom will be practiced tomorrow in your courtrooms, in your living rooms and in your communities,” Piper said.

“The proof of that is turn on the news, listen to your show, go Google the news and you see these angry, red faces of 21-year-olds who are demanding that any contrary idea, anything they don’t like and makes them feel uncomfortable, be silenced. 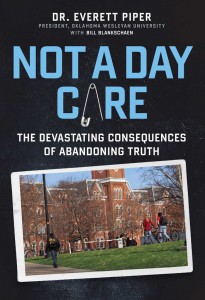 “It’s ideological fascism. It isn’t academic freedom. We must confront this with the truth. Otherwise, we will not be a free society and a free culture,” he said.

Piper rejects the idea of safe spaces at college, often referring to the quote from C.S. Lewis in “The Chronicles of Narnia” that the great lion, Aslan, is not safe but he is good. Piper said the same approach ought to be applied to today’s culture.

Piper said that challenge ought to come from the pursuit of truth. But he said the left has made “truth” an ugly word.

“In days gone by, the academy recognized that there was an objective truth to judge the debate, not the power of the professor and not the pout of the pupil,” Piper said. “It was objective truth that judged the debate. When we started disparaging objective truth and dumbed it down to nothing but a collection of opinions, we started losing the battle, and it was inevitable that this intellectual freedom would succumb to fascism over time.”

But he said the result of no longer valuing truth gets far uglier.

“Right now, just because people disagree on issues of sexual behavior and morality, that makes them haters in the minds of the general public,” Piper said. “This is very dangerous, and it squelches debate because people are afraid to express their views. They’re afraid to disagree because they’ll be labeled a phobic or a hater as the result of a simple disagreement on a behavioral choice.”

The question over truth is nothing new. The Gospel of John recounts a critical exchange between Jesus Chris and Pontius Pilate shortly before Pilate consented to the crucifixion of Christ.

“Therefore, Pilate said to Him, ‘So You are a king?’ Jesus answered, ‘You say correctly that I am a king. For this I have been born, and for this I have come into the world, to testify to the truth. Everyone who is of the truth hears My voice.’ Pilate *said to Him, ‘What is truth?’” (John 18:37-38).

“I define truth as an objective reality,” he said. “It is out there. It can be known. It can be embraced. It can be pursued. It’s something other than your opinion or mine. It’s not a social construct. It’s a revelation of God. Even outside of scripture, it’s defined that way in our seminal documents, where we are told that we are endowed by our Creator with certain self-evident truths.

“These truths that give us a free society, constitutional republic, are given by God. They aren’t made up of power,” Piper said.

And he said history proves that terrible things happen when opinions trump truth.

“Pol Pot and Mao (Zedong) and Robespierre and all the despots of history had opinions, and it didn’t end well. Christ told us, ‘You shall know the truth and the truth shall set you free,’” he said.

Piper realizes his critics will reject his argument, but he said their logic only proves his point.

“If anybody disagrees with me and says, ‘That’s just your opinion of education. I think you’re wrong,’ the very claim that they’re making – that I’m wrong and they’re right – presupposes an objective standard … that makes them right and me wrong.  Therefore, they’ve agreed with me without even knowing it,” he said.

Piper also has a strong warning for parents who honor the truth as they search for the right college for their children.

“Stop sending your kids off to institutions that teach this pablum. Why would you do this?

“You’re spending tens of thousands of dollars to send your kids off to an institution, that after you spend 18 years of your life training up a child in the way he should go, in the first 18 minutes while you’re driving off campus, they take pride in tearing his heart, mind and soul out. Why are you paying for that? Don’t do it,” Piper advised.

“Seventy percent of your sons and daughters will walk away form their faith and their convictions before they’re juniors. There’s a reason for it. You’re paying money to make it happen, Stop it,” Piper said.

To avoid this frustration, Piper offered key questions to ask at any college visits.

While Piper suspects “ideological fascism” is about to engulf American culture, he said he and others who love and pursue truth have no choice but to stand and fight back.

“I’m gonna wave the banner of the truth of Christ and of the truth of scripture,” Piper said. “I’m going to wave the banner that scripture is inerrant and revealed and that truth is an objective reality. If I win waving that banner, that’s great. That’s God’s grace. If I lose waving that banner, frankly, I don’t care. It’s the right banner to wave. I’ll go down fighting.”

Piper has no illusions about how this struggle could damage U.S. culture, but he knows who wins in the end.

“I know the end of the story,” he said. “I believe that truth will prevail. Between now and then, there may be discomfort. There may be dissonance. Iron may have to sharpen iron. God may have to redeem for good what others have intended for evil.”