A new film about Louis Zamperini, the World War II hero whose life is the subject of an adaptation of the book “Unbroken,” will not include the story of his faith in Jesus Christ. 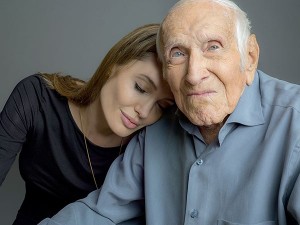 The prisoner of war survivor and inspirational speaker – known for his bold profession of faith in Christ — died from pneumonia in Los Angeles on July 2. He was 97.

The Universal Pictures film will be directed by Angelina Jolie, based on “Unbroken: A World War II Story of Survival, Resilience and Redemption” by Laura Hillenbrand.

The adaptation of Hillenbrand’s book involves collaboration between Jolie and the Coen Brothers, known for their idiosyncratic postmodern films, combining wry humor, an eccentric viewpoint, and sometimes brutal violence. The film is set for release on Christmas Day.

According to an L.A. Times story published before Zamperini’s death, Universal Pictures held the movie rights to Zamperini’s life story for more than 50 years, but no one could figure out how to compress his remarkable saga into a two-hour film.

After Jolie read “Unbroken,” she became obsessed with the film project. She had only directed one film, which was not a commercial success, and was looking for a second project, but didn’t anticipate something of this magnitude.

“I wasn’t really looking for something of this size,” Jolie told the L.A. Times. “But the way Laura writes about him is the way I like to read about people. It was like I was witnessing the birth of a man – it was something I wanted to tell my sons about.”

When Jolie met with Donna Langley, chairman of Universal Pictures, to communicate her concept, she said it “would end with Zamperini’s liberation but not include his bout with alcoholism and Billy Graham-inspired religious conversion,” according to the L.A. Times.

“She was really impressive, thoughtful and thorough,” Langley told the Times afterward. The studio had considered hiring a veteran filmmaker, but changed their mind after meeting with Jolie. They approved a $65 million budget and took a leap with Jolie – still unproven as a director.

Christian media critic Ted Baehr, the founder of Movieguide, is disappointed by the absence of Zamperini’s journey to faith in the upcoming movie. “Unbroken is one of the best books ever written,” he notes. “The great story is that he got out of his anger problem (with PTSD) by coming to Christ.”

Even though Zamperini’s Christian conversion is left out, there are a few references to faith highlighted in the film’s trailer, which opens with a minister preaching to a young Zamperini: “However dark the light, however dim our hopes, the light will always follow darkness,” the minister says.

The trailer also depicts Zamperini praying while in captivity during the war. Both portrayals may be designed by marketing people to appeal to Christian audiences, despite a glaring absence that may spark complaints by those familiar with the book.

Caption: Jolie with Zamperini, shortly before his death