Christ in Our Own Back Yard…

I’ve interviewed many missionaries and heartfelt servants of Christ. They’ve traveled the globe seeking those in need of both physical and spiritual nourishment. In many cases they risk their very lives to spread “The Good News”, and yes sadly, some have even been martyred in the cause of humanity. That type of commitment is not to be diminished, as it speaks to the Gospel which tells us we should carry His word to the corners of the earth so all nations will hear it. (Mathew 24:14) And it is true that I’m often at a loss but for God’s intervention and direction, for explaining the drive which compels these ordinary people to do extraordinary things. In their own words it is truly faiths calling. 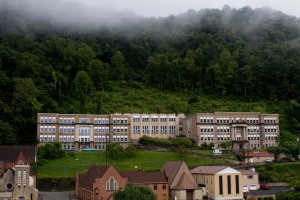 The old high school where The Community Crossing is currently located

With that said there has always been something nagging at me, more so a product of my own political leanings than any form of Christian comparison or competition. Nevertheless, it hasn’t escaped me that for all the political pandering and promises, how is it that there are still the poor and hungry inside the borders of this greatest of experiments? How is it the “war on poverty” could be such a miserable failure, after literally generations of mindless and frankly reckless spending? This certainly is a legitimate question for some of the elitist economics professors at the local over-priced university, however I’m not inclined to start a conversation or debate over who in America is actually in need and who is not in the United States. I would however tell my Christian friends, that there are in fact those desperately in need right here at home, and in some cases, right in our own back yards. “The Good News” is, those extraordinary people I just mentioned are stepping up right here in the good ole’ USA, to the moral work our shameful elected officials seem unwilling or simply unable to navigate, and “building communities of faith, one person, one family, one community at a time”.

I don’t know about you folks, but I’ve watched countless documentaries dealing with families living just outside the lines, many strung out along the Appalachian Trail and those Border States it runs through. One such state is West Virginia, (Coal Country) and that’s where this story of “Christ in our own backyard” begins…

But before I go there, for the few who don’t know, Ralph Davis was writing for my editor long before I had the notion that I could write for a Christian newspaper like “The Good News Today”. I enjoyed reading his articles immensely. Ralph is a Godly man of strong faith to be sure, and one could reasonably assume his children would follow in his footsteps. In the case of his Daughter Elise, you’d have guessed correctly.

It was my pleasure to speak with Newlywed Elise Zajac this past week, and it was a heartwarming conversation with the young American Christian. A graduate of Eastern Connecticut State University and one of two children to Ralph and Lisa Davis, Elise majored in Sociology with minors in Criminology and Spanish. After graduating, she worked at Camp Harkness in Waterford CT, a camp for disabled adults, where she met Chris Zajac. They were soon engaged. While living in Rhode Island, Elise and Chris were caretakers for Elise’s 85-year-old grandmother. In addition, Elise worked for a non-profit called “Communities for People” as a caseworker for children reunited with their families after placement in foster care. 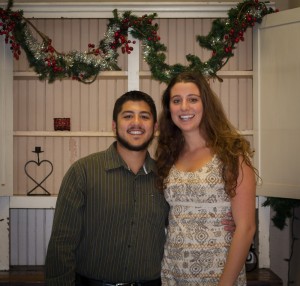 Chris and Elise Zajac at a recent Thanksgiving dinner event held for families in the community.

With a heart born of God’s blessing and pre-conditioned for service, Elise and Chris were married in September 2015 after a summer working at Camp Harkness together. Both are passionate about serving God, helping others, and were moved by a recent visit to the aforementioned “West Virginia”, and more specifically McDowell County. Chris had interned there with “The Community Crossing Inc.” and was inspired to return. Meanwhile Elise had become overwhelmed by her “dream job” as a local child case worker, and felt constrained by the bureaucratic red tape which always seemed to stand between her and her Christian desire to serve her community. You see, from a very young age, her dad and mom had instilled in Elise the goodness in giving back to one’s community by way of the Holy Spirit. By her early teens, she’d already been active at the Warwick Rhode Island Family Shelter as well as other community organizations and shelters for battered women. She would eventually rise to greater service…

McDowell County West Virginia is a town not unlike many other small towns that somehow (conveniently) wind up outside the governments assessment of how things are going in our country. To coin a phrase, they are still waiting to see the “great recovery” some in Washington are always talking about. Truth be told, McDowell is one of the poorest counties in the nation. The population was over 100,000 during the 1950s when coal was king. And while McDowell remains a top producer of coal, 70,000 jobs were lost in the 1970s and later due to reduced demand for coal used in the steel industry coupled with increased mechanization. Ironically, more than half of the electricity produced in the US is generated from coal, and more coal has been mined in McDowell County than any other county in West Virginia. Now, the 22,000 people remaining in McDowell in 2015 face formidable obstacles, not the least of which is a mountain of misinformation about the natural resource so necessary to the American economy, but so demonized by some politicians in the age of the “global warming” argument. Inevitably, and as jobs other than those in the mining industry are in short supply there, idle hands turn to the devil’s work, fostering drug and alcohol abuse issues, as well as some of the highest teen pregnancy numbers in the country.

Notwithstanding the politics, which are nothing but a cruel distraction for the poor and needy of McDowell and counties like it, the need is obviously great. So with hearts called to West Virginia, but unsure of what exactly they would do there, Elise and Chris stunned their friends and announced they were following their hearts. Well, they weren’t totally directionless as Chris had built a number of relationships through Community Crossings in volunteering with several of the sports ministries during his internship, and the couple had learned some about the accommodations they might acquire in the short term so they would have a place to settle in.

On arriving however, Elise immediately recognized how great the need really was, and went about the business of settling into an abandoned school which had been purchased by the ministry and rented as temporary housing for the missionaries. Maintenance is regular and costly, and Chris works day and night to keep up with repairs. They are not alone however and receive help from the main ministry and others. The gymnasium also serves as the hub for Chris’s sports ministries and God is always blessing them with volunteers to help out. 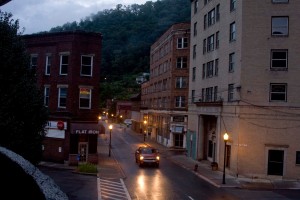 Some of the many abandoned buildings in McDowell County

Elise started right in with what she knows best, that being the “Parents as Teachers” ministry where she can help parents in difficult situations prepare their children for school. The goal of the program is to provide all parents with research-based child development information, guidance, assistance, and family support that will encourage the development of young children. The overall vision objective is to see all children learn, grow, and develop to realize their full potential in God’s world.

Elise has also been putting out feelers in the areas of high-school outreach and believes her age will allow her to break down some of the barriers that get in the way of good communication with our young people, especially young girls who may be in crisis. She told me she’s made some very good contacts and inroads, even while navigating the ever-present resistance to the very mention of the Lord and Savior. Elise has also noticed the large number of prisons in the surrounding area, and tells me the idea of prison ministry is another area “God has been putting on her heart”.

During our conversation I could hear the voice of yet another committed soul who’d been called to the greater work. Not for fame or fortune, but because God was talking and she was listening. Elise sounded excited and ambitious as she talked about the support of “The Community Crossing Inc.” ministry, but how she is always conscious of the constant drain on finances as they’re always moving to support all of the outreach programs. With that said, I would ask all of you to consider “The Community Crossing Inc.” as a way for you to reach out to folks right here at home this holiday season. The need is so much greater than one can believe in our country. And it’s easy to overlook those, who through no fault of their own, a lost job, a sick child, find themselves in a difficult way and with little help available to them at this difficult time of year. Now it’s easy for pundits like me to make a fuss about this or that in terms of what we believe are the reasons for poverty and need in the greatest nation on planet earth, but it’s always folks like Elise, and Chris who are moved to action and who make all the difference.

So I asked Elise what her message might be to anyone reading the words I would write about her efforts. There was a pause and then she said, “Be obedient to God. He’s talking to us every day, and telling us what we must do. Trust Him and follow your heart and what he puts on you.” Well that made me think of a similar conversation I had with my wife just a few days before, where we both agreed that you just have to be listening when he’s talking… Think about that, and have a blessed Christmas…

If you are compelled to help this great and burgeoning mission in West Virginia, please contact them on the web at: www.ccxwv.org, or at the following address:  The Community Crossing, Inc., 225 Maple Ave, Welch, WV 24801 or call (304) 436-8300. You can contact Chris and Elise at elise@communitycrossing.org.