“Thus saith the Lord, Stand ye in the ways, and see, and ask for the old paths, where is the good way, and walk therein, and ye shall find rest for your souls.” (Jeremiah 6:16)

According to Pastor Rob Ventura, Rhode Island is among the most biblically illiterate states in the entire country. Although it’s a sad commentary on the spiritual decline of the state founded by Roger Williams, few would contest the truth of this observation. However, all that may soon change, because help is on the way.

Ventura, pastor of Grace Community Baptist Church (GCBC) in North Providence, recently unveiled exciting new plans for the Rhode Island School of the Bible (RISB), modeled after the New York (Manhattan) School of the Bible. Meeting at Grace Community Baptist Church, RISB will be the only brick and mortar bible school in Rhode Island. A work in progress for some time, RISB is coming to fruition in March. 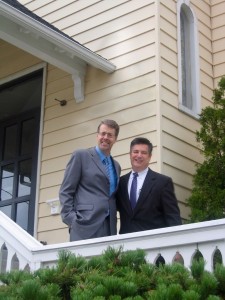 RISB’s 2016 curriculum includes six classes. For the first eight-week semester, three classes are being offered: New Testament Greek; How to Study the Bible (hermeneutics); and Biblical (nouthetic) Counseling. For the second semester, three different classes will be offered: Doctrine of God (theology); Biblical Hebrew; and Biblical Preaching. A total of four classes may be taken each year, or two per semester.

At this point, the various legal requirements for RISB have already been met including an Article of Incorporation for a 501-C3 registered with the State of RI as an entity separate from the church. A governing Board of Directors consisting of seven men and women will periodically handle any issues that may arise. Seminary trained teachers have been selected for the faculty, all of whom have their Master’s degrees in theology (M. Div) or beyond. (When the school expands, additional men holding master’s degrees have agreed to teach.) Every teacher must hold to a historic Confession of Faith and have a master’s degree.

The teachers for the first semester will be Pastor Rob Ventura (N. T. Greek), Brian Baker (How to Study the Bible); and Dr. Robert Burelli, Jr. (Biblical Counseling.)

In New Testament Greek, Pastor Ventura will teach students how to say and write the Greek alphabet, Greek vocabulary, and familiarize them with diphthongs, definite articles, prepositional phrases, conjunctions, verbs, nouns, and provide exegetical insights to aid in their understanding of the New Testament.

In How to Study the Bible, Brian Baker will help students develop observational skills and learn how to analyze and survey contexts, passages, words, and historical backgrounds of different books of the Bible.

In Biblical Counseling, Dr. Robert Burelli will show students how to focus on biblical concepts for understanding people and their problems. They will address heart worship, guilt, a biblical view of self, the biblical method of change, and the proper handling of crisis situations.

Marketing for the School is already underway. Last summer a Board member held an internship for three youths who procured the names of 275 churches; calls to these churches will be made beginning in December. Radio spots on WARV also start in December in addition to radio interviews. Three months of advertising have been purchased in “The Good News Today”. 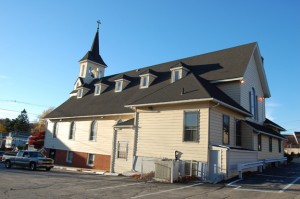 In a recent interview, both Pastor Ventura and co-Pastor Jack Buckley expressed thankfulness to God for the school’s talented Board of Directors, all members of Grace Community Bible Church. “Pastor Jack” will be the Dean of Students for the new School. Since his mid-20’s, his dream has been to have a Bible school in RI, something he has long wanted to be part of. Although he did not know what form it would take, the Lord prepared him well. As Dean, he will oversee curriculum and help students to follow tracks or steps that will make them more useful in their home churches.

Energetic and friendly, Buckley will also act as “quality control” in the classes, giving a bit of feedback to teachers along with a sense of accountability. By making himself available to the students, as well, he will be a resource to them concerning any issues or questions about the School or their training. Grades will be given or, if preferred, students may simply audit a class. Final exams will be administered with the goal of making every facet of the program work to serve students best.

Grace Community Baptist Church (GCBC), where RISB classes will be held, has made great strides in recent years. Pastor Ventura preaches a reform message that has attracted many serious seekers from all socio-economic backgrounds. While a number of RI churches appear to be shrinking, GCBC is growing steadily, accepting an average of ten new members a year, with seven just since January. It is obvious that members love each other from the heart, demonstrating true biblical Christianity in practice.

Pastor Ventura, the author of several books, is the general editor for Going Beyond the Five Points, published in May 2015. Ventura recognizes the great doctrinal shift now occurring across denominational lines among believers who are beginning to understand the biblical truth of God’s electing love and saving grace in Christ. To this end, he sought to capture the voices of seasoned Reformed pastors who could graciously guide and encourage God’s people while instructing them on the subjects of the abiding relevance of the Ten Commandments; God-centered worship; the masterful unfolding of God’s great plan of redemption through divine covenants; the identity, nature, and work of the church; and the help that confessions of faith lend to our grasp of God’s glorious word.

Going Beyond the Five Points is an anthology consisting of various articles about Reform Theology authored by Dr. Richard C. Barcellos, Dr. Sam Waldron, Earl M. Blackburn, and Dr. Robert Martin. Since its publication in May, it has already sold a few thousand copies, and is available at Amazon.com. It was endorsed by Robert Strong, Professor of Systematic and Pastoral Theology at Reform Theological Seminary at Atlanta, and Dr. Derek W. H. Thomas. Dr. Thomas wrote, “Just when we think we have mastered the Reformed faith, along comes something that shows that we have merely started the journey. The “Five Points” provide a skeleton – arms, legs, torso and head, perhaps, but often (in execution) out of proportion, and without flesh, or a beating heart. There are depths and immensities, implied in the Calvinistic framework of Dordt, that require further effort to understand and assimilate if we are to make any real progress. Rob Ventura has brought together a team of trusted and able writers to take us on that journey of discovery. Essential reading for those who are not content remaining in the shallows.”

This January, Pastor Ventura has been invited to speak in Medellin, Colombia at the Reformed Baptist Church’s annual conference attended by approximately 400. His topic will be “The Life of Piety.”

Each year Grace Community Baptist Church hosts the Southern New England Reformation Conference, attended by about 300 faithful. This May the featured speaker will be Dr. Derek W. H. Thomas, Senior Minister of the First Presbyterian Church in Columbia, SC.

Next September, GCBC will host “One Passion Ministry”, featuring Dr. Steven Lawson. Dr. Lawson, who teaches Old Testament and Expository Preaching at Masters Seminary, and wrote the foreword for Pastor Ventura’s book, Spiritual Warfare (2014), will return for the second part of his teaching instruction on Expository Preaching (O. T.).

About twice a year, Pastor Ventura sends out a Prayer Letter to Reformed Baptist churches all over the world. Readers of the Fall 2015 Letter learned about the general ministry of GCBC including its regular meetings, systematic and expository preaching, weekly Bible classes and prayer meetings, men’s and women’s meetings on bible topics throughout the month, personal counseling, nursing home ministry, special outreach to Spanish-speaking brethren, open air and door-to-door evangelism, the annual conference, and finally the exciting news about the founding of the RI School of the Bible.

One thought on “Rhode Island School of the Bible”