A New Gospel from a Modern Pope…

I watched with great interest the extensive coverage of the first-time visit of His Holiness Pope Francis to America. I am not one of the 70 million Catholics in the U.S. I am a Christian; I follow Christ, not the Pope. The thrill and excitement of this historic visit has fallen flat for me because of a lost opportunity. Pope Frances is a humble, soft-spoken and systematic speaker. I see him as mega-Santa mixed with a twist of Oprah, and so the result is: the Pope is more popular than Jesus!

As I listen to Pope Francis’ messages, I wonder, “What’s the point?” I say this respectfully, but his speaking points on advancing the discussion on climate change, closing the economic gaps, protecting religious minorities and giving aid to the tens of thousands of new immigrants in Europe is much the same as any politician running for office, or an NGO seeking donations. The Pope gave no solutions to any problems when addressing Congress or when speaking at the U.N. General Assembly. The Head Shepherd, of the largest Christian denomination in the world, did not open his Bible. Are we settling for a counterfeit gospel?

When my boys ask me about this older man dressed in a white cape, I tell them: “Remember what a counterfeit bill is? It looks the same, maybe even feels the same as real money until you hold it up to the light (the truth) or try to use it to pay for something (eternal life). That’s when you learn it is a fake and you have been fooled.” The Pope’s message is a counterfeit gospel. It is a compassionate and refined message that bypasses Jesus.

The Roman Catholic Church comes close to Christianity but never crosses over the cross. It never accepts the only substitute that counts. Any religion that adds to or takes from the true Gospel leads its followers through the broad gate and many are coaxed in by abiding by moral laws and keeping traditions. We must remember, both gates say “Heaven”–but only one leads to eternal life. Morality and traditions, even at their best, lead to a self-righteousness that doesn’t save. 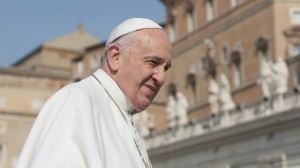 Jesus was in fact a judgment preacher, very different from the Pope and his message. He taught about eternal consequences of sin more than the loveliness of Heaven. Why? Jesus was warning us! That is real love. “Watch out; you will die if you don’t believe in Me!”

During news coverage of the Pope’s visit, I heard Father James Martin say: “The Pope will help people meet God in a new way.” That statement stopped me mid-sip of my morning coffee: “Meet God in a new way?” Is the Pope updating The Gospel? There is no need to knead the Gospel to make it acceptable for today’s political correctness. God’s message is living and active, relevant to everyone everywhere, crossing all socio-economic boundaries. It penetrates to the heart, transforming lives. If people are truly changed, from the inside, then they will make the right social decisions: taking care for the poor, feeding the hungry and seeking after peace. These are natural effects from having a changed heart and mind. You can’t expect a change in action before the heart has been renovated by the power of the living truth.

Others see what we want them to see, but God can see what is hidden: our thoughts, desires, ambitions, motives, attitudes and intentions. A mirror reflects our physical image, but the Word of God reveals our inner heart. The Bible gives us a true reality check: we are sinners in desperate need for God’s grace! As the brave protesters of the Catholic Church proclaimed: Sola scriputra, Sola fide, Sola gratia, Solo Christo and Soli Deo gloria!

One such reformer was John Hus (1370-1415). He was one of many bold reformers who objected to the dissipations of the Roman Catholic Church. He was stripped, humiliated and burnt at the stake for his beliefs. Hus encouraged us to “Seek the truth, hear the truth, learn the truth, love the truth, speak the truth, adhere to the truth, defend the truth to death; for truth will make you free from sin, the devil, the death of the soul, and finally from eternal death.” His last words were: “God is my witness that…the principal intention of my preaching and all of my other acts or writings was solely that I might turn men from sin…I am willing, gladly, to die today.” He was murdered by religious men, just like his Savior was! His hope was anchored in Jesus, and his destiny was heaven.

We all have a once-in-a-lifetime opportunity, and it has nothing to do with being in D.C., N.Y.C., or Philadelphia to see the Pope. Life’s ultimate question is: What do you do with Jesus Christ? It saddens me when I see a prominent man of faith, such as Pope Francis, receiving the crowd’s praise for talking about safe and easy social issues, instead of pointing to the Savior and His message of peace and reconciliation to God. Who is this man of “faith”? You can be religious and devout and miss out on eternal life.

If the Pope truly believed the Bible, he would warn about the imminent climate change that awaits us if we don’t repent from our sin and believe in Jesus. God’s punishment for sin is a very hot hell. The Pope has an unprecedented opportunity with world-wide news coverage to preach the Good News to his 1.2 billion followers: Repent, believe, and be saved!  This is the Gospel of Jesus, John The Baptist, and every true follower of Christ.