Raised by Gay Parents, He Shocked Them by Coming Out as a Christian – and Then a Pastor

When he was two-years-old his university-professor parents divorced and his father and mother entered the gay lifestyle. His lesbian mom and her partner took him to gay pride parades, LGBT clubs, parties and campouts, while his father remained “closeted” for several years.

“Mom was a political activist,” says Caleb Kaltenbach, author of Messy Grace (Waterbrook Press). At gay pride parades, Caleb witnessed Christian demonstrators spray homosexual marchers with water and urine. When he asked his mom why they were doing this, she said: “Because Christians hate gay people.” As a result, Caleb wanted nothing to do with Christianity or God.

In high school, a friend invited him to a Bible study and he accepted with ulterior motives. “I thought I would pretend to be a Christian, learn about Christianity, and dismantle their arguments,” he recalls.

He had attended a mainline denominational church with his father sporadically, but was bored by it and didn’t understand the liturgy. “They never discussed God, only social issues,” he notes.

So when he grabbed a Bible off his dad’s shelf and went to the Bible study, he didn’t realize there was a difference between the Old and New Testaments. Confused when they asked him to read a verse from 1st Corinthians, he began reading from 1st Chronicles. 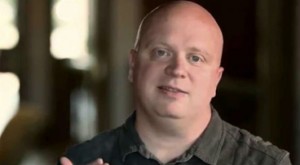 “I was so embarrassed, but I wouldn’t let these Christians get me down,” Caleb says. He had lumped this group of believers in with the angry demonstrators he saw in the street. But something amazing happened when he began to read the Bible for himself. “I really fell in love with Jesus,” he recalls. “I learned that Jesus is really not like the Christians I saw on the street corners.”

Later, he met a Christian friend at a restaurant and asked, “What do you have to do to be saved?” As his friend, Gregg, waxed on about the realities of Jesus and His divinity, something stirred within Caleb.

“As Gregg was talking, it happened,” he writes in his book. “I can’t explain it. Something just shifted inside me. I truly believed what he was saying. There was no way around it—in that moment I became a follower of Jesus.”

Baptized “covertly” almost immediately after he was born again, his dad grounded him after absorbing the shocking news. His lesbian mom and her partner were horrified when they learned, and accused him of the ultimate betrayal –siding with bigots.

The next week, Caleb attended a Christ in Youth conference in southern Missouri. While there, he felt God’s call to become a pastor and confessed before everyone he wanted to be a preacher.

Soon he was attending Ozark Christian College and later, Talbot Seminary in La Mirada, California. In Southern California, he served on the staff at Shepherd of the Hills Church for 11 years. After graduation, he accepted a call as senior pastor of a church in Dallas. Then something remarkable happened, both his parents independently made decisions to move to Dallas and began attending his church.

“What was even more incredible was that as time went on some church members were nicer to my parents than I was,” he notes. As the church loved his gay parents without judgment, their hearts began to soften.

After three years of serving in Dallas, he felt called to move back to Southern California to lead Discovery Church in Simi Valley. “Two weeks before we left Dallas, both of my parents gave their lives to the Lord!”

“I was floored…how did this happen? To this day, I’m still not sure. I do believe my parents are saved.”

In Caleb and his family’s remarkable journey of transformation, he has developed some unique perspectives because of his upbringing. “I believe any expression of sexuality outside of heterosexual marriage is sinful,” he says, “but I don’t believe God called me to make gay people straight.”

While Caleb holds to traditional doctrinal views, his ministry style is very open and accepting. “I completely concur that God designed sexuality to be between a man and a woman, but that’s not the first thing I talk about with somebody that’s gay,” he continues. “I want to get to know them as a person, to build a friendship.”

At his church in Simi Valley, he says, “We want to be a place where you can belong before you believe.”

Caleb Kaltenbach is the lead pastor at Discovery Church in Simi Valley, California. He is married to Amy, a schoolteacher, and they have two children. He is close to completion of a Doctor of Ministry from Dallas Theological Seminary.